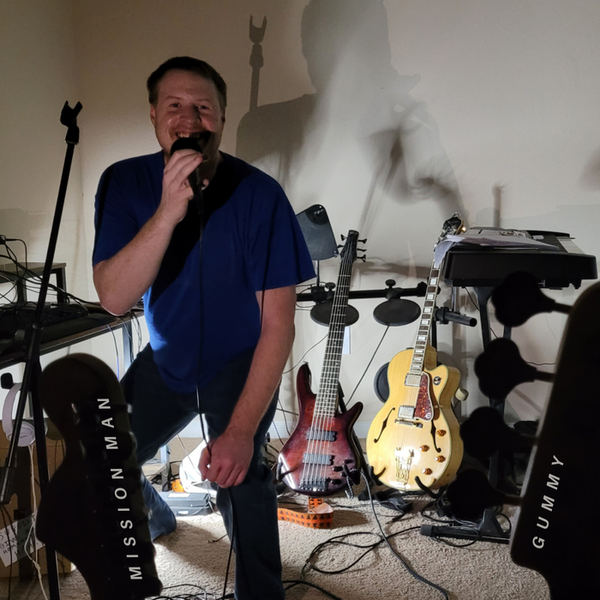 "Gummy" is my 14th studio album, and my most eclectic.  Just a quick breakdown from track-to-track.

1. "Next First Breath" is a Depeche Mode style song about experiencing new things and experiencing familiar things as though they were new.

3. "Turn On The Stereo" is a classic hip-hop style song about the power of music to bring people together, told through the story of overhearing a neighbor's music, until it spreads around the world, "one home at a time," and even the dolphins dance along.

4. "It's Friday" is a Jazzy Hip-Hop song with a 3 minute long piano solo at the end, about embracing today.

6. "Living In My Memories" is a Dark Synthwave track about moving to a new city 6 months before a pandemic hit.

8. "We Were There" is a jazzy hip-hop track about appreciating moments with friends and family, and includes a reference to my favorite book series ever, "The Wheel of Time."

9. "Track 9" is written in 9/4 time with a bass line that starts on the second beat, and complex lyrics.  Yet, the vocals are almost traditional hip-hop.  Maybe you'd call it sci-fi hip-hop. It's my favorite song that I've ever made.

10 "Let's Just Go" is a lo-fi jazz ballad with pop influences, and is the original version of the song. The Groove Mix is the version I created later.

I am very proud of the album.  Gummy is what my niece calls me, so both the album title and release date (January 19th, 2022 - my birthday) have personal meaning for me.

Buy at my Spring store

You can get a wide array of "Gummy" merch, including t-shirts, sweatshirts, mugs, stickers, tote bags and more!  Spring prints them on demand, ships them to you, and then kindly gives me the profit.  This gives you a ton of options if you like the album and want to support me further. Thank you!

Click on the "buy" button within the Bandcamp player, and I'll ship the CD as soon as possible, and you'll get to instantly download the album as well.